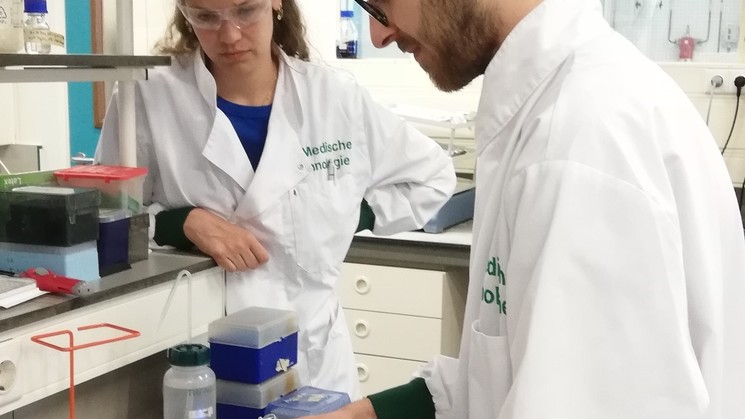 Student team iGEM from Eindhoven wants to make a contribution to the fight against antibiotic resistance this year with a fast detection method for bacteria. In the run-up to the finals of the annual iGEM (International Genetic Engineered Machine) student competition, which will take place in Boston in early November, the team has started a crowdfunding campaign via a special TU/e website. The objective for now is to raise 2500 euros, to be used to cover the costs of participating in the iGEM competition.

TU/e has been sending a team to the iGEM finals (‘Giant Jamboree’) in Boston for years, but never before did a team try to raise (part of) the costs through crowdfunding. A university contribution and sponsoring from companies are the team’s main sources of income, says team manager Jeroen Deckers. “This is offset by serious costs; the entire team’s participation in the finals alone costs twelve thousand euros, and in addition, lab research is very expensive as well.”

In order to balance the budget without having to dig deep into their own pockets to pay for the trip to Boston, iGEM’s team of eleven students decided to ask the help of sympathizers this year. “Other teams told us that crowdfunding can work quite well,” says Yvonne van Mil, who is in charge of the team’s public relations. “The iGEM team from Leiden raises more than eight thousand euros each year this way.”

That is why in mid-August, the team created a webpage on TU/e’s platform for crowdfunding on which student teams VIRTUe, TU/ecomotive and Bluejay had already started campaigns earlier. The more you donate, the greater the reward promised to you by the team: a donation starting at 25 euros will get you mentioned on the website, you will get a personalized thank you for 50 euros, and generous donors who spend an amount starting at 100 euros are welcome to come and visit the BeNeLux Mini Jamboree, which the team organizes for all the Dutch and Belgian teams on the TU/e campus prior to the Giant Jamboree. For 200 euro you also get a personal video about the competition in Boston.

The problem the iGEM team wants to tackle is that of antibiotic resistance: as a result of overprescribing and a careless use of antibiotics, more and more bacteria have become unsusceptible to these kinds of medicine. “The point is that it may often still take three days to determine which bacterium causes the infection,” Deckers says. In the meantime, doctors often prescribe antibiotics in order to treat to most probable culprits, he explains. “For instance, a bladder infection can be caused by five different bacteria. However, if you know which of these you need to treat within an hour, it becomes much easier to apply a targeted treatment, instead of adopting a shotgun approach.”

The plan is to use so-called phages to detect bacteria, Van Mil says: “A phage is a kind of virus to bacteria – completely harmless to humans. Each phage only infects a certain kind of bacterium and subsequently multiplies at such a rapid pace that it causes the bacterium to bursts open within half an hour. At that moment, we can detect the phage’s DNA and use it to identify the bacterium.” The students want to use a form of bioluminescence whereby molecules emit light the moment they bind to a specific piece of DNA that was predetermined by the team with a computer program specifically written for this purpose. The research group led by professor Maarten Merkx, one of the team’s scientific supervisors, has a great deal of experience with these kinds of detection techniques.

The team has contact with the Queen Astrid Military Hospital in Brussels for the tests with the phages. Because even though they cause no danger to humans, TU/e does not allow researchers to work with phages in its labs. Deckers: “Phages mainly represent a risk to all the other experiments on bacteria that are conducted here.”